primary caves formed by large lava flows. This means they are formed at the same time as the surrounding rock. 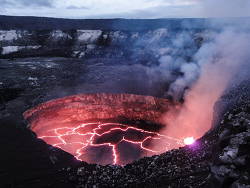 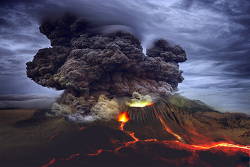 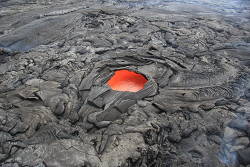 Molten rock (magma) that pours or oozes onto the Earth's surface is then called lava. The viscosity of the lava depends on its silica content. Low-silica basalt lava has a low viscosity and can form fast-moving (15-50 km/h), narrow lava streams or spread out in broad sheets up to several miles wide. During long lasting eruptions, lava flows tend to become channeled into a few main streams. Like a river they follow the valley and mostly stay inside their bed. Overflow of lava from these streams solidifies quickly and supports the channel walls, building natural levees or ramparts. So actually the channel is created by the flowing lava itself, a self supporting process.

Lava streams that flow steadily in a confined channel for many hours to days may develop a solid crust or roof and thus change gradually into streams within lava tubes. Because the walls and roofs of such tubes are good thermal insulators, lava flowing through them can remain hot and flowing, much longer than surface flows. Lava can flow great distances from the eruption sites inside the tubes. Just an example: Kazumura Cave on Hawai'i Big Island formed on Mauna Loa, which is 4,169 m asl. The slope from the eruption site is 50 km long and has a height difference of 4,000 m.

Lava produces big amounts of gas and steam, and while flowing through the tube this produces a certain air pressure inside. This keeps the tube open but also may press a hole into the covering crust, which is still hot and rather soft. Those venting holes are called hornitos (Spanish for little ovens) or spatter cones. The reason why they form horns or tubes is simple, the gas pressure from below throws small pieces of lava out of the venting holes, which form cones, up to 15 m high, on top of the vent. The lava in those cones is formed of layer above layer of spatters.

When the lava flow from the volcano ends, the lava will continue to move and drain the tube downhill. Actually it was flowing because of its own weight all the time, and this does not change when the flow ends. This leaves a partially empty tube which may be called lava tube cave. Lava which is not able to flow out of the tube will remain in the form of solidified pools, flows, or even waterfalls. Other parts will stay full of lava, and the tube will end here.

Lava tubes can be entered at the beginning and at the end of the tube. In between there are two kinds of openings or skylights, hornitos and roof collapses. Hornitos formed while the lava was still flowing, collapses are a result of subsequent erosion. It is easy to differentiate between them, as hornitos do not have much collpsed material at the ground, it was transported away by the flowing lava stream. Collapses are rather common, as the roof of lava tubes is rather thin, a result of the way it formed. Also the durability of this caves is rather low, they are generally gone in less than 10,000 years. Older tubes are extremely rare.

The most famous place for lava tubes on Earth is Hawai'i. Because of the geography, the lava tubes on Big Island are the biggest in the World.

Kazumura Cave is 65,500 m long [2020] and has a height difference of 1,102 m [2020] from end to end. With this size it is the deepest cave of the USA and the 10th longest! The second deepest cave of the USA is still a lava tube of Hawai'i, Huehue Cave and many other caves in this list too. Despite those superlatives, lava tubes are never more than a few meters below surface!