The Poarta lui Ionele (Ionele Gate) is a huge cave passage with an impressive entrance portal. It was lately modernized, with new trails and electric light. The pictures on this page are 20 years old and show wooden ladders of disputable reliability. But there is now an elevated trail and new staircases.

The main valley with the town Gârda de Sus has a side valley to the north, right at the new orthodox church. Following the road 750 towards Dobresti, a side valley branches off to the right. This valley has a single lane road to various small hamlets up the valley. It actually leads to the cave, but it's not possible to park in front of the cave because the road is bordered by a limestone cliff on one side and the river on the other side. To visit the cave, park at road 750, there are several opportunities, and walk the kilometer to the cave.

The cave is pretty impressive. Even the walk to the cave is impressive, as it is a 10 minutes hike along a typical karst valley with steep limestone walls, strange rocks and some shelters. Following the single line road the visitor finds a place were a limestone rich water comes down from the left hillside. The water springs only a dozen meters above the road and builds tufa terraces.

There is a bridge across the river, and the trail to the cave goes uphill along the tufa terraces. The brook which forms the tufa is collected at the bottom, then crosses the river in a canal. It was used as drinking water supply not long ago, and the narrow bridge of the canal was used as the access to the cave. The path leads up a long stone staircase, first along the brook, then through bushes to a fence with an iron gate. Passing the gate the visitor enters the enormous entrance portal of the cave, 22 m high and 10 m wide.

The path follows the main cave passage and here it is elevated, because the floor is the riverbed of a cave river, which is dry most of the year but reactivated during snow melt and sometimes after heavy rains. The cave has a lower, water filled level which ends at the spring and produces the tufa. This lower level is younger and still rather small. When the production is low during summer, the upper level is completely dry, but when the water level rises, the upper level is reactivated for a short time. There are three different springs inside the cave which start to flow one after the other. But with the new trail it is not necessary to have an eye on the weather when visiting this cave.

The main passage has three levels, it is possible to climb them on two iron staircases about 8 to 10 meters high Then the main passage splits up, a lower level which is only accessible to cavers, and an upper level which soon narrows. The far end is populated by bats and emanates the typical smell of ammonia.

This cave is long known, but was first explored by P. Chappuis, R. Jeannel and Emil Racovita in 1921. In 1986 it was used as a filming location for the Romanian movie Flăcări pe comori (Flames on Treasures) directed by Nicolae Mărgineanu. During the filming the stuntman Viorel Roru Ludușan spent his free time exploring the cave further. He discovered some formerly unknown side passages, one of them was immediately used for shooting a scene.

Two years later, in 1988, the members of the Polaris Alpin Speo Club explored nearby Zgurăști cave. On a warm-up tour they climbed the chimney at the end of the cave and discovered a new gallery they named Polaris Gallery. After this discovery, Viorel Ludușan convinced a group of speleologists and locals to develop the cave. The trail to the cave was built, also two staircases, the lower from wood and the upper from metal. Still the cave was freely accessible, there was no trail between the staircases, and there was no electric light. The development was financed by donations from visitors. It was a typical show cave Romanian-style.

Finally in 2011 the municipality Gârda de Sus decided to invest money of the Ministry of Tourism in the modernization of the cave. A new wooden bridge across the river was built, the cave entrance was fenced off, a ticket office built, an elevated trail and a new staircase built. Also, the cave was illuminated with electric light. In order to protect the cave animals, especially the bats, the last part of the cave was closed by a concrete wall. Quite funny is the explanatory sign which was erected at the ticket office. It states: "The value of the investment was 273,383.54 lei, 273,000 lei by the Ministry of Tourism and 383.54 by the commune of Gârda de Sus". While the cave is theoretically open daily, outside of summer season the warden might open later or open only after appointment.

The cliffs in the valley form various shelters. The biggest shelter called Pestera Corobana lui Girtau was equipped with benches, desks, and fire places. The grotto is an official barbecue area, often used for parties and functions by the locals. There is even a comfortable wooden bridge across the river from the road. 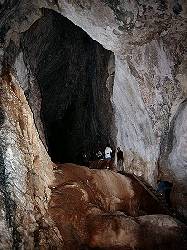 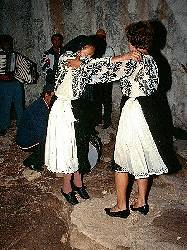 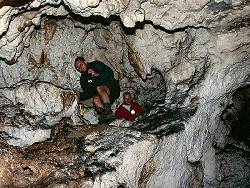 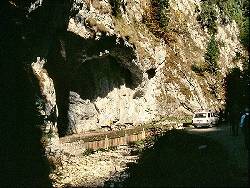